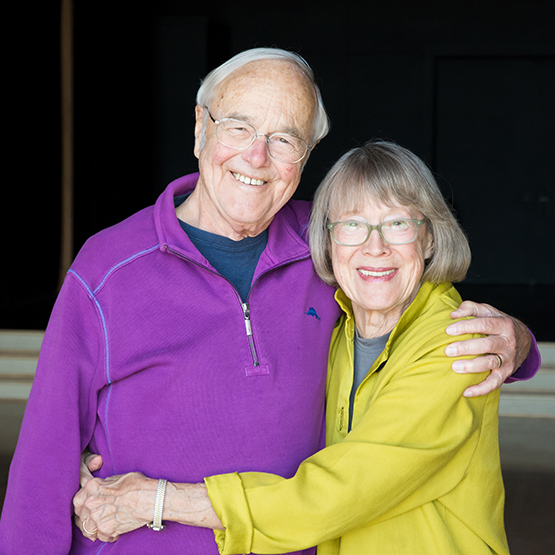 The Spirit Award has been given since 2000 to a Lopez individual, couple or partners who have consistently improved the lives of all Lopezians. These people give to the community in extraordinary ways: unselfishly, reliably, lovingly, with tolerance and integrity. They are often the community's unsung heroes.

The Bryants were stunned and deeply touched to be selected. "We're not that social. We try to keep a low profile." Only when asked does Trevor mention the volunteer work he and his wife Joanne have done since they moved here in 1996: for Lopez Hospice, Lopez Island Clinic, SWAP, the sailing program, their church. Neighbors and friends enthusiastically describe the boats and floats Trevor has fixed, the comfort quilts Joanne has sewn and given away.

Kate Scott, a past recipient and in charge of this year's decorations, explains that the problem for those planning the party is how to get everything the Bryants have done for Lopez-and continue doing-into the program: "They're in their 80s and still tuned to what others need."

The Award celebration embodies Lopez Spirit. Everyone is invited, and everyone contributes. Lopez Center donates the space, sound/video help, non-alcoholic beverages and set-up for no-host bar. Friends and family create the program and decorate to make it a memorable evening. Everyone who attends brings potluck dishes and their own cutlery, plates, cups, and glasses.

Officially named The Andy and Dolly Holland Spirit Award, it was inspired by the retired couple who, after a working life of public service in forestry and education, moved here before Lopez Center had been built. Seeing the need, the Hollands presented a check for $50,000 to the Board. "Get going with the project," Andy said, kicking off a fundraiser that paid-up front-for construction of the building that stands today.

Recipients of the Spirit Award are selected by a committee of Lopezians from a list of nominations. "By design it's a good and difficult process," says Lopez Center board member Shawn Westervelt, who has chaired the committee for the past five years. "The best part is reading all the nominations. And the party!"