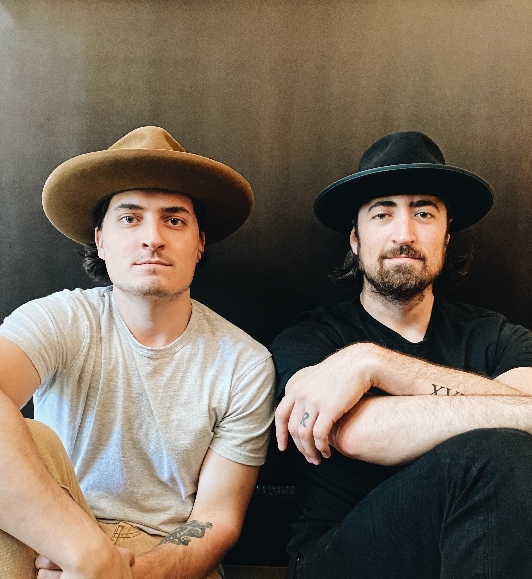 Ticketed at the door: Adult $18.00, Youth $10.00
Sponsored by
TOURWEST & NATIONAL ENDOWMENT FOR THE ARTS
The Reeve Family
Sponsor this event
Blood is thicker than water and there's nothing like family creating music together to prove it. With contrasting blood-harmonies and left-handed/right-handed guitar playing, singer-songwriter duo The Talbott Brothers combine rock, blues and pop with honest storytelling.

Nick and Tyler were born and raised in Imperial, a small town in Southwestern Nebraska, just a stone’s throw from the Colorado border. They began writing and performing together before relocating to their mother’s birthplace of Portland, Oregon. Tyler, the youngest (lead vocals, baritone guitar, harmonica) and Nick, the oldest (backing vocals, lead guitar) discovered their love of music after digging their dad’s old dreadnaught guitar out of the basement and teaching themselves to play along to Johnny Cash, Bob Seger and the Beatles on vinyl.

Their latest album, Ghost Talker, is the second full-length studio album from the sibling duo. Rolling Stone named their latest single one of the 'Top 10 Songs to Hear Now,' defining their music as “cinematic folk-rock for open highways, widescreen skies and the limitless reach of the American Heartland.” Blood harmonies and sibling rivalry are evident in their songwriting with lyrics pulling from the trials of everyday life and the questions we all face. “Everyone has ghosts, whether they talk about them or not. We wanted to take off the mask and be honest with this record, hoping that what we needed to say is what people needed to hear.”

At its core, the album is transformative in nature, prompting the listener to question motives, face realities, and go to war with their own ghosts. Spiritual apprehension and seeking answers are common themes. “Shadowboxing” is a hard look in the mirror, realizing that what you have been fighting all along is your own fear. “It takes one good fight to turn things around.”

Lead single, “Run No More” forces a look at the past while offering a soul shaking guitar solo that feels like a rally cry. “We tried running for a long time but it doesn’t do a heart any good. Sometimes in a wake-up call you realize what’s most important to you. "Run No More" is about when your legs give out and you gotta turn around and fight.”
In honor of Jen and Aharon’s wedding the Reeve Family would like to extend their appreciation to the Lopez community for the opportunities, support, friendships and jobs it has given to Jen over the years.
https://www.thetalbottbrothers.com/