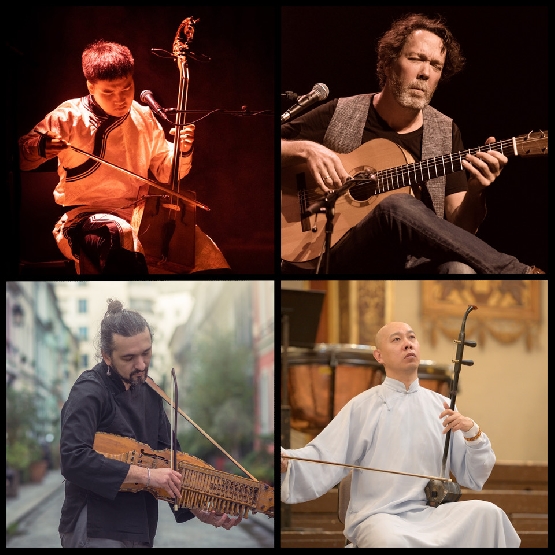 Ticketed at the door: Adult $18.00, Youth $7.00
Sponsored by
LCCA
The Violins Of The World is the brainchild of French Gypsy guitarist and composer Mathias Duplessy. It brings together the rhythms and melodies of many different cultures in an incredible new style of exotic and unique arrangements.

Asian always, spirit of the blues often, and Celtic rhythms and melodies of the Mongolian steppe offer an astonishing cross-cultural encounter. The four virtuosos bridge the gap between tradition and modernity.

The group consists of -

Guo Gan from China with his fiddle Erhu.

Their first record, Mathias Duplessy & The Violins Of The World, was followed by a successful world tour that opened people's eyes and ears to the band's amazing musical abilities. They are back with a new album, Brothers Of Strings (released in January 2020), a road movie of new worlds, from the Gobi, to China and the ancient Far East, including wild covers of Morricone's "The Good, the Bad and The Ugly" and Dire Straits' "Brothers In Arms".

In Fall 2022, Duplessy & The Violins Of The World will tour the United States for the first time.